When I started this book I was laughing at his spot-on descriptions of everyday scenarios. He has an ability to describe a situation so you could mentally visualize the setting…. as if you were right there. Here is a writer who brought England into my home, vivid imagery of places we visited as well as lovely accounts of English villages we have not been fortunate enough to see on a vacation.

Bryson had the good fortune to live in England for almost 20 years of his adult life. He met and married an Englishwoman when he was working at a hospital. Once he and his family decided to move to the USA, Bryson made a 7 week tour of England, Wales and Scotland. He hiked, he took buses and rented cars in this quick walk-about, all the while journaling the sights, and his impressions/opinions about various towns, histories and the people he encountered. This book is a result of those journal observations.

That being said, there were a few disappointing passages which revealed Bryson as arrogant and condescending. While I won’t say it ruined the book, it made me sad to know the image he portrayed as ugly American. Usually we don’t include antidotes and stories that place us in a bad light; I know I don’t. Surprisingly he relayed a story about verbally abusing a McDonald’s counter clerk.

The young man asked if he’d like an apple pie with his order and Bryson went off on him. Bryson asked if he thought he was brain damaged and ranted. How rude! Anyone who has ever had to endure a fast food job knows you are sometimes required to suggest another menu item to the customer. Any adult (most especially a visitor in another country) that would berate a young person publicly doesn’t sit highly in my book. It’s more than rude, it’s being a bully.

I abhor the idea of the reputed “ugly American” and it embarrasses me when my fellow countrymen make asses of themselves when vacationing abroad. Sadly, this is the reputation that sticks. We aren’t all bombastic, pompous idiots!

So, overall the tone of the book (with the exceptions of two boorish incidents) was a detailed travel journal, one man’s opinion and observations on his trek around Great Britain. It’s full of good information about the tourist places as well as gems on villages off the beaten track. Overall a funny read but I don’t think I will see if he behaves in Australia and pass on that book I was planning to read.

For a foodie inspiration, I recall the signs Put British Pork on Your Fork when we traveled there on vacation.

While I am not serving pork from a British source, we do shop locally and buy meats from locally raised animals. This pork tenderloin came from Jones Country Meats, just 25 miles from home in southern Georgia. Would you like some Apple Brandy-Glazed Pork Tenderloin? 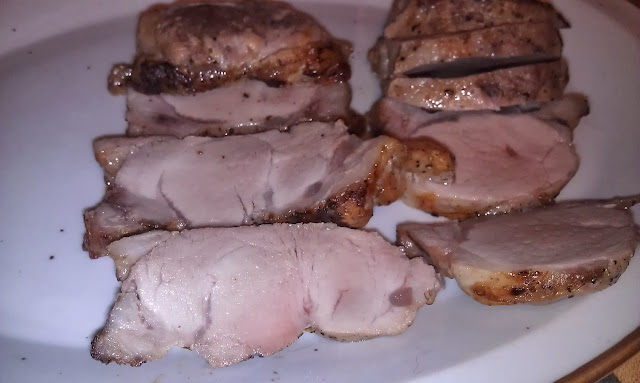 Method
Combine first 4 ingredients in a saucepan; bring to a boil. Cook until reduced to 1/2 cup (about 32 minutes). Remove from heat; discard thyme and shallot. Stir in butter, mustard, 1/8 teaspoon salt, and 1/4 teaspoon pepper.

28 thoughts on “Notes From a Small Island by Bill Bryson”