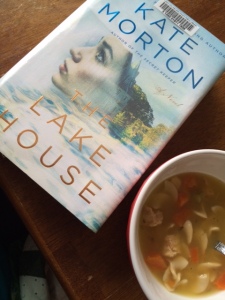 The very beginning of this book was slow going for me. After reading and enjoying Morton’s first book, The House at Riverton, I was expecting to be caught up immediately. After all, the setting is Cornwall, it’s a multi-generational story line and it’s a mystery. I love all of those things.

I persevered through the first chapter set in 1933 and learned about the estate Loennaeth, the Edevane family and the Midsummer party. After your introduction to the main characters we jump to 2003 and meet Detective Constable Sadie Sparrow in London.

The Edevane family and London detective link up to tell a story through two different timelines. It’s a tapestry, the story threading through and told in varying perspectives as you hear 16 year old Alice Edevane’s story, then Alice looking back over 70 years where she is an established mystery writer living in London. You hear the mother, Eleanor’s back story and learn about her youthful days and then the sadness of her life after the war.

The main focus is the young son of the Edevane family, 11 month old Theo Edevane. Sometime during the Midsummer party young Theo disappears. As I read along it wasn’t clear if Theo was murdered, killed accidentally, kidnapped or perhaps just wandered away to be lost in the surrounding woods or the lake, his body never found. Obviously the family is shattered and overcome with grief. After a police investigation they move back to London and never return to the Lake House again.

Now in 2003, DC Sadie Sparrow has a backstory of her own but suffice it to say she ends up at her grandfather’s house in Cornwall. She is on enforced leave from the Metropolitan Police Department and must while away her time in the country until she is allowed to return. So she runs….she runs as much as she can, one day running into the brambles and trees that surround Loennaeth. The house was abandoned in 1933, furniture still in the original placement, a cup and saucer sitting on a table where it was left 70 years ago, dust covering a life that was simply abandoned. Being a copper Sadie wants to investigate this cold case and she starts a personal inquiry.

From there on out you read about the family secrets each sibling and parent has. There are many twists in the story and I can say I never saw the ending as a possibility. In some ways the ending was very cool but in others, it’s too neatly wrapped up for all of the characters. I’m on the fence about what I would have liked to see as an ending. Nonetheless I enjoyed the book and will be reading more of Kate Morton’s work.

I was going to make a pear cake as that treat was mentioned a few times. But soup and stew was also mentioned and for this time of year, I am going with a hearty lamb stew. Perfect for these rainy evenings we have been slammed with lately. 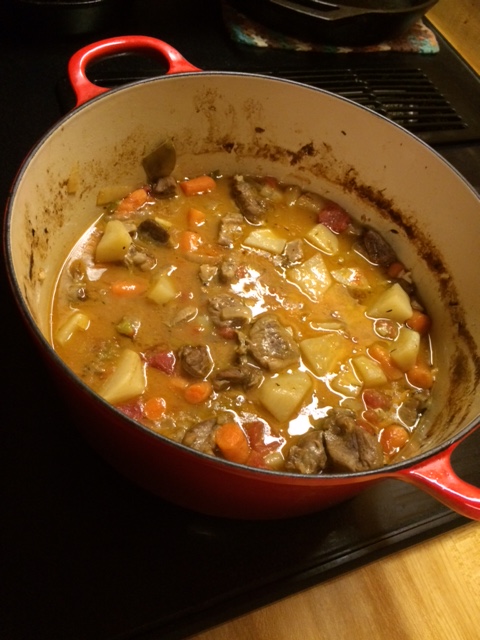 This is the book for the category Body of Water in my What’s in a Name reading challenge hosted by Charlie at The Wormhole.

8 thoughts on “The Lake House by Kate Morton”