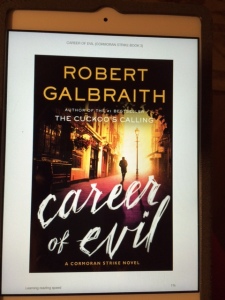 This is the third installment in the Cormoran Strike detective stories. I am becoming quite fond of Cormoran and his assistant/partner Robin Allacot.

This one is darker and has grisly images when a serial killer is featured, stalking Robin. As bodies are discovered across London, many with body parts cut off, the police and Strike combine forces to investigate these gruesome crimes. During the course of the surveillance the joint venture ends with Strike being warned off the investigation, threatened with jail.  I will note that if you are a fan of the cozy mystery type books, this is definitely not one of them so be forewarned!

In the meantime, you have chapters from the killer’s point of view which are quite chilling. He intends to kidnap Robin and hack her up, all in a way to get even with Strike for a long nursed grudge. Robin shines in this book and I found myself liking her even more, happy that Galbraith (J.K. Rowling) has such a strong female character. Robin is very feminine as well as able bodied, intelligent and savvy in the investigative process.

Without giving spoilers I will say I was concerned for the outcome of one of my favored characters and mentally prepared to give the series up if that character was killed off. The ending was not at all as I expected but it certainly set it up for another book. Hopefully that fourth book will pick up where this one left off. I expect fireworks in that book!

I read this one on my iPad, never had read on that device before but I enjoyed it. Using the Kindle app it was great as the pages are backlit.

Adding my review to Goodreads, The British Book Challenge.

3 thoughts on “Career of Evil by Robert Galbraith”