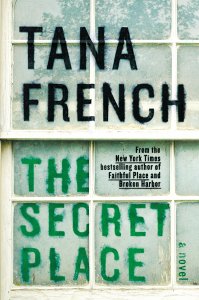 The Secret Place is a 2014 novel by Tana French set in Ireland.   Anyone who knows me or frequents this blog knows I am a die-hard Tana French fan. I loved the four previous books.  In publication order they are:

When Amazon put it on sale I snapped it up at the amazing price of $7.99 for my Paperwhite.  I couldn’t wait to read this book, number 5 in the Dublin Murder Squad series.

There were various interesting discussions on Goodreads about the book as well as fellow bookworms chiming in about their favorites in the series.

I think the biggest turnoff for me was the high school girl babble.  Most of the book is set at St. Kilda’s, a girls’ boarding school in Dublin. The chapters alternate between the points of view of detective Stephen Moran and student Holly Mackey.

From Wiki, because it’s easier to use their synopsis and I’ll tell you my beefs later…..:

“The key characters are eight teenage girls, members of rival cliques. Chris Harper, a teenage boy, is murdered on St. Kilda’s grounds. The initial police investigation is inconclusive. A year later, 16-year-old Holly volunteers information to Moran. She has discovered a picture of Chris, along with the statement “I know who killed him”, posted on a school bulletin board called the “Secret Place”. Moran is assigned to work with senior detective Antoinette Conway to investigate. Moran and Conway question all eight girls and find that there were some close relationships between Chris and most of the eight girls. After further investigation, they find evidence that links Chris’s murder to Holly’s clique. When the detectives grill Holly, her father, detective Frank Mackey, intervenes and complicates the investigation.”

About 20% of the way into the book I was ready to pull my hair out.  I was very much concerned I would start talking like so many people I overhear these days. Such as:

OMGGGG, I’m like, so into his style and, like, seriously….why would anyone wear that color combination *giggle giggle giggle* shrieks of teen-aged laughter.  I’m like, just go talk to him.  And she’s like, noooooo, I couldn’t.

The use of “like” and “goes” (in place of He Said or I Replied) is prevalent these days. There are some adults at my work place who talk  this way. What happened to proper English?

That being said, Tana French is brilliant in her research and getting it down how many teenagers speak these days. It was a believable interview between detective Moran and any of the young women he questioned.  I personally had enough by the 25% mark.  that’s investing a bit of time and I kept on because Tana French is an amazing author.  I love her.

The other thing that bothered me was I only liked Detective Moran.  Antoinette Conway was such a bitch and again, well written Ms. French, the portrayal was spot on evoking my dislike of her.  So, being completely honest, I skimmed through much of the book from there on out, only dedicating myself to the detectives and Holly Mackey because they weren’t driving me slap crazy.

Since I read how it all shook out, who left the note on The Secret Place and found out who killed Chris – I could see there were some great twists in the book.  This just wasn’t for me.  If it were the first book I read by French I may never have read others.

So, since the Goodreads community stated their favorites I have to say, The Likeness was one of mine.  And Frank Mackey in both The Likeness and Faithful Place is my favorite detective.

I am very excited about the sixth book, The Trespasser, set to be released later this year.

8 thoughts on “The Secret Place by Tana French”