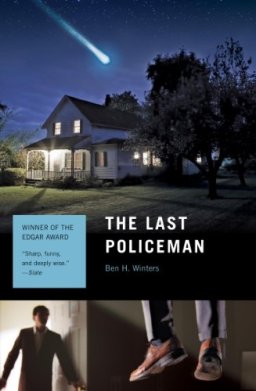 Quite a long time ago I saw The Angry Grey Cat had reviewed The Last Policeman, apocalyptic literature complete with a mystery and a dedicated detective. A comet is projected to directly impact Earth, extinguishing all life in roughly a 6 month time frame. There are several types of people represented in this book:

1) Preppers who believe they can survive such an event, stockpiling guns, food, water and other resources,

3) dedicated individuals such as our starring character, Detective Henry Palace. People like Henry, the medical examiner and Ruth Ann who continues to serve food and tea (and eventually just hot water) at the local diner.

Those dedicated to their profession don’t go Bucket List, they remain faithful to their profession and carry on despite the odds of them surviving after the impact. This is actually pre-apocalyptic and we get a first hand view of human nature at its best and worst.

I didn’t know this was a trilogy but it could have been a stand-alone book. I have already started book two, Countdown City and will most likely read the third book. 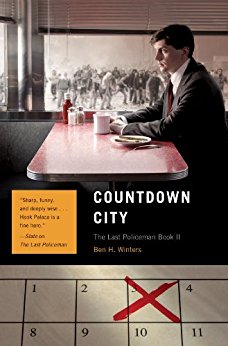 Hi, I’m back!  I did finish Countdown City and liked it.  We are still enjoying former Detective Henry Palace, the cop that can’t retire.  We start this book with only 77 days left before the asteroid named Maia smacks down in Indonesia and kills off most of the Earth’s population.

In the remaining days, Henry can’t seem to relax and feels a sense of duty from his police force days.  He is investigating the disappearance of Brett Cavatone.  Has Brett gone “bucket list” or is he dead? Brett’s wife asks Henry to find him and so he sets out to do just that.

After a bit of an investigation Henry realizes he needs help getting into a former University which has…believe it or not….seceded from what is left of the United States.  Brett had hooked up with an anarchist named Julia and there is a definite conspiracy theory in the works that actually plays out to be true.  Besides the hoarding of firearms the biggest problem is the U.S. Navy.  They are openly shooting people who try and gain access to our shores,

That’s a scary real life scenario. The military are keeping immigrants from the impacted hemisphere from entering the U.S. An asteroid is going to hit their continent and our Navy won’t let them in safely! That’s so rude.

This photo below is from the end pages at the back of the book.  I haven’t checked it out yet but I am curious about how people answered. 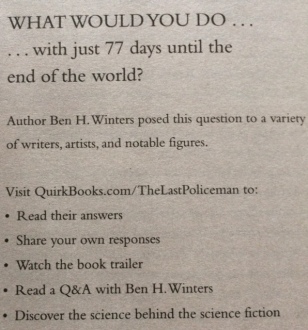 It’s not brilliant writing but it certainly kept me entertained.  If you are a fan of apocalyptic lit this will be right up your alley.  Let me know what you think.