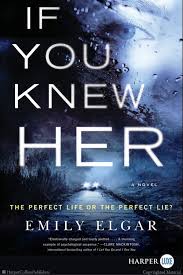 I have to start with saying, the ending of this book gutted me. It was emotional, I wanted a different ending for the characters I grew to like yet somehow it was the perfect ending.

Alice is a nurse at a hospital, one that works with comatose patients, and she is a lovely, caring woman.  You can really get behind this character,  have empathy for her in both her professional and personal life.

The story is told from several points of view bringing us different perspectives and information about what’s going on.  We have the nursing staff with Alice, Mary and Lizzie. Later in the book you want to throttle Lizzie (you’ll see).  They interact with these comatose patients, nursing them, comforting them and hoping for improvement.  We read about several of the patients, some in a passing reference because they are moved to another facility or they die.  The two main comatose patients are Cassie, a woman brought into the ward after a hit and run, and Frank,  a stroke victim.

Frank is an alcoholic and one of the long term patients on the ward.  While the doctors think he is in a PVS (permanent vegetative state) he is actually aware of what’s going on around him.  He can’t speak, blink, move a finger to let people know he’s locked in.  What a nightmare.  From his point of view we learn about his previous life, the love for his daughter Lucy and what it’s like being an alcoholic.   He describes addition:  The addiction “pounced on me when I lost my job, it pounced on me when Ange (his wife) finally chucked him out.  After that it seemed to take up residence within me, switching places with the man I tried to be, consigning Frank to the shadows, meek and withered as the beats gnawed my bones, sucking out the marrow of my  life every bottle of whisky…..”   Great descriptions.

Cassie’s story has it’s twists and turns.  She clearly misses her deceased mother April, she loves Jack but is sometimes distant from him and her best friend Nicky is like a sister.  One day she witnesses something that changes her life (don’t want to give spoilers).  Shortly afterwards she is stuck by a car, obviously on purpose (that’s in the beginning) and left for dead. You come to wonder if she was targeted by her husband, best friend or step-father.  The story builds up as we learn more about our supporting cast.  I had my assumptions about what happened with Cassie but the end still surprised me.  I liked reading about Cassie and her life before she went into a coma.

While food was mentioned here and there, and I will note it because…I do write about books and food….it’s not a celebratory book to enjoy a meal.  It starts out interesting but near the end this plot grabs you by the collar and demands your attention.  Emotional ride here at the very end.  Ok so, there was:

I would recommend this author and I will most certainly look for her future publications.  Well done, Emily Elgar, as you had me shed a tear at the end.
Great wrap-up.

For more info on the author check out her website HERE. Emily grew up in West country and currently lives in East Sussex England.  Much thanks to LibraryThing for my copy of this book.

15 thoughts on “If You Knew Her by Emily Elgar”