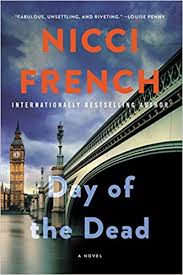 I’m certainly a fan of a series. The more books in a series the better in my opinion. Some folks don’t like the feeling of commitment with five or more books, following the same characters on a mystery or whichever genre it may be – I figure I am going to be reading anyway and I like familiar characters, watching them grow as characters and in their personal and professional lives.

So, this is the end of the Frieda Klein series. Eight books total starting with Blue Monday and winding our way through the days of the week. As I’ve mentioned before, I read the Sunday book first so I read many spoilers. Still, I went to the beginning and read through. Sunday was the best book. Thursday was not my favorite and had a seriously slow start.

This last book, Day of the Dead, wrapped up the series and so I will no longer have Frieda, Reuben, Josef, Chloe, Jack and Karlsson in my life. Josef was my favorite of the sub-characters.

Frieda needed to disappear in the previous book and spent most of her time in this last book under the wire. A killer was on the loose and she was the target, a string of violent incidences and a conclusion that I could accept.

There was a character named Lola Hayes who is introduced early in this book. She needs a subject for her criminology classes and plans to explain how psychoanalyst Frieda Klein thinks, planning on interviewing those close to Frieda and working out a profile. By trying to discover more about Frieda she puts herself in danger and is forced, literally, to go on the run with our main character. It’s a cat and mouse game and a bloody one at that.

The beginning was slow for me and I’ll say I wanted a different ending to this eighth book saga. I wasn’t especially disappointed as all things were resolved, I would just like to have seen some characters end up differently. It’s hard to review this without giving out a very important factor that is a huge spoiler.

Lots of food mentioned throughout the book.

Butternut squash soup, burgers and beers, bowls of bean sprouts and Greek salad, a simple salad of tomato and avocado and a bread roll.

Spaghetti and red wine, a Ukrainian lamb dish and a bottle of vodka. A flat white and piece of carrot cake. Chicken sandwiches with lots of mayo and tomatoes.

“Frieda bought a cauliflower, some cheddar cheese, butter, milk and a half-baked baguette. She added a small jar of mustard to the basket, two chocolate bars, apples, a jar of marmalade and oatmeal. Later she cooked a mustardy cauliflower cheese which they ate with hunks of baguette.”

I bought a cauliflower and planned to make that cheese dish but I still haven’t gotten around to it.

Goodbye Frieda Klein – it was a good ride.  Lots of mystery and I would certainly watch a television series if one was developed base don her character.

Linking up with:
Joy’s Book Blog for British Isles Friday
Heather for her August Foodie Reads

5 thoughts on “Day of the Dead by Nicci French {Book 8, the end of the Frieda Klein series}”