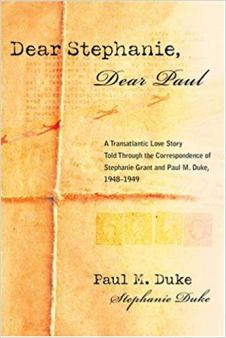 I learned about this book from the blog Georgia Girl with an English Heart.  Kay, the writer of this blog married her pen friend from England.  Kay is an Anglophile  and had been writing to an English fellow for nine years before they married.  The book Dear Stephanie, Dear Paul: A transatlantic love story told through correspondence was recommended to Kay as it’s a similar story.

The time period is late 1940’s.  You can get a historical snapshot of the latest music, books, fashion and culture from both writers, American teenager Paul and English teenager Stephanie .

The rationing situation in England was interesting to read about as well as the economy.  Paul’s salary was a good fortune compared to English salaries fro the same job.  Paul saved and saved until he could eventually meet Stephanie and get a tour of England. After hundreds of letters where friendship blossomed into love, they married and lived in Ohio.  They were married 58 years and had three children.

If you’d like to read about that time period from the points of view of Paul and Stephanie you would love this book.

Sharing with Joy for her British Isles Friday event.