Concerns:
Looking over the recipes you’ll find many that can not be prepped and cooked in under 30 minutes. Since the title is Gluten-Free Recipes in 30 Minutes – one would think this means 30 minutes include prep and serving time.

*Honey-Barbecue Wings actually has a 50 minute cook time and that doesn’t include the prep. You are meant to boil the wings for 9 minutes, drain and transfer to a baking sheet for 25 minutes more, then turning the wings and baking an additional 15 minutes. Same with the *Spicy Buffalo Wings recipe. Total time there equals 49 minutes and that doesn’t include any prep time.

*The Three-Bean Chili may be prepped in under 30 minutes but it’s a slow cooker recipe and this takes 8 to 10 hours. It gives the option to use a Dutch oven or stockpot but this cook time is 3 hours.

*The Beef and Shallot Stew also takes hours to cook – 4 to 5 hours in a slow cooker and 2 hours in a stock pot.

*Spicy Turkey Chili is another slow cooker recipe or you can opt to cook on the stove-top for 1 hour.

*Almond Butter Frozen Yogurt takes over 3 hours after you prep and cook the required ingredients.

*Herb Roasted Chicken takes an hour and half. 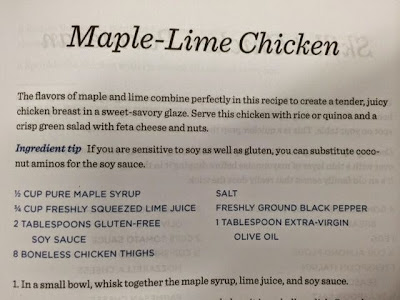 The cooking time states to cook for 2 minutes each side in a pan and then bake for 15 minutes or until done. We all know thigh and breast meat cooks for different times but I do know breast or thigh meat will not cook in 15 minutes. I abandoned trying this one.

I did try the Cinnamon-Raisin Baked Apples. The prep is certainly under 30 minutes but the bake time was not. The recipe calls for a bake time of 15 minutes or until they are very tender.
Well…….I baked the apples for 30 minutes and checked on them. Still not done. After 45 minutes we decided to eat the baked apples. We need a knife to cut through them. They were just OK so I won’t make them again.

We added a dollop of Cool Whip and that was nice….but didn’t take away from the fact that these weren’t tender as expected.

Overall, you can get some nice soup and salad recipes as well as seafood recipes that don’t need lots of cook and prep time.

I just felt that the title is misleading on some of the recipes because you get the initial impression the meal is ready in 30 minutes as that is the TITLE of the book.

Pros:
This book is divided up into chapters explaining how a gluten free diet works, the advantages and necessities for those with celiac disease and those who are wheat intolerant and other information.

I liked the section explaining how to make your own gluten-free flours such as quinoa flour, almond flour and an all-purpose baking mix. I don’t know if the recipes are acurate though as I had trouble wit one recipe straight off. (See Baked Apple recipe above)

There are also conversion charts, a list of Gluten-free brands and resources at the end of the book.

There are many recipes which you can actually serve in under 30 minutes such as the soups, many of the appetizers and all salads. Mac and Cheese and many seafood recipes are also under 30 minutes, BUT, that is not the case with all recipes.

Overall, you would be better served to check this out of the library first to see if it’s for you before parting with your money.

I won this book from LibraryThing.

I like cookbooks. Just about any sort will give me a few hours of entertainment looking over the recipes, photos and stories. This book intrigued me not because of the Lagasse name but because it addressed a variety of meals ( appetizers to dessert) which may be served to those with a wheat intolerance.

There are some good recipes in there but frankly, most of them could be found in any number of cookbooks. If flour is called for they substituted a gluten free baking mix or rice flour. I did prepare a few things from this book and I liked them. My husband who has a wheat intolerance, not celiac disease, liked them also.

There is a good resource page at the back of the book providing links and contacts for gluten-free products, links for celiac foundations and helpful information for those who aren’t just wheat intolerant but have actual celiac disease. They also mention a few magazines devoted to those with celiac and allergies.

Overall, I am glad I checked this one out of the library. I liked it, I didn’t love it.