The setting is 1941 in London during the Blitz. I was anxious to get to the Cornwall setting but this takes a few chapters. We met three very brave  women who come from different backgrounds.

Violet lives in London and helps at her mother’s shop selling sandwiches and cakes. Her father is dead, her sister was recently killed in an air raid bombing and her brother-in-law is a soldier missing in action. As his mother was German there are insinuations he was a spy.  Cheery stuff here. Violet moves her nieces to Cornwall as it’s safer and goes to work at an air base.

Eva is a showgirl in London. She meets an American airman and there is some romantic interest there, then the club where she is performing is bombed during  a strike. She awakens in the hospital and after recovery she moves to Porthcurno Cornwall to work at an air base using her knowledge of Morse code to help with the war effort. ( there’s a backstory to this development )

Hazel is a local woman who already lives in Cornwall and works at the air base. She is married and her abusive husband is deployed during the war. He gets home on leave occassionally and is most assuredly not a model husband. Not a bad man, just not a good husband.

I thought it was a slow start but found it more enjoyable once the three main characters  met up at work. I liked the friendships formed and the Cornish setting. Normally I like an edgier plot and action but this is a nice “beach read” type of book. If you are looking to escape the horrors of the news right now you may enjoy this book.  Nothing objectionable here.

Much thanks to Netgalley for the advanced complimentary copy. I was not compensated for this review and throughly enjoyed this book. Publication by Avon Books UK is February 18, 2021. Genre is historical fiction/womens fiction.

Betty Walker lives in Cornwall and is a prolific writer.

This is a good collection of personal letters written by a female serving in the military during WW II. During this era the US military didn’t give the same benefits or respect to the women who stepped up to serve their country. The letters are a great insight into a woman’s daily regime and work assignments and in Cpl. Wanda Renn’s case, an exciting assignment in North Africa. Wanda clearly resisted the conventional path women were usually steered in the 1940s. It’s that sense of adventure and curiosity that led her to join the Army.

As someone who is interested in genealogy, finding letters such as these are a true treasure to someone hunting down information about their family. It provides insight to the ancestor’s personality as well as details about the life they led. Hats off to Patricia Arnold for preserving a slice of her family history by publishing this book. If you are interested in WW II stories, particularly those detailing women in the service, this is an enjoyable light read.

On another note, small world that this is, I was astounded to read that Wanda Renn settled in Owosso, Michigan. The town is small and I don’t often read anything that mentions Owosso but I actually lived there for a short period after my mother passed away. My sister lived there and she took me in for several years. It was always a place that seemed locked in an earlier time period.

What do you make after reading a book like this? Something Wanda may have missed from the US. Such as an apple pie. As she was serving in North Africa and had a brush with French culture, let’s make the apple tart.

You know the saying…an apple a day keeps the doctor away. Guess sit depends on how hard you throw that apple. And how good your aim is.

Thank you for your service, Wanda Renn, and thank you to Patricia Arnold for sharing personal letters.

Vanished: The Sixty-year Search for the Missing Men of World War II by Wil S. Hylton

In the fall of 1944, a massive American bomber carrying eleven men vanished over the Pacific islands of Palau, leaving a trail of mysteries. According to mission reports from the Army Air Forces, the plane crashed in shallow water—but when investigators went to find it, the wreckage wasn’t there. Witnesses saw the crew parachute to safety, yet the airmen were never seen again. Some of their relatives whispered that they had returned to the United States in secret and lived in hiding. But they never explained why. (From Amazon and book jacket)

I enjoyed reading the back stories of the 11 men from missing B-24 crew lost over the Islands of Palau in World War II. The story kept me captivated, wondering throughout the book if they would find the remains or clues about the Big Stoop Crew.

Prominently highlighted were the stories of Jimmie Doyle and Johnny Moore (two of the airmen) and you had a feeling of knowing them, feeling compassion for the families they reluctantly left behind. Jimmie Doyle’s son Tommy went through life second guessing whether his father had survived and lived in California with a new family (a cruel rumor that haunted him) or if his father perished in the sea.

Tommy Doyle’s wife was relentless in her quest to find information about her husband’s father, knowing what anguish he quietly suffered for years and years about his father’s disappearance. It was through some of her research and phone calls, one in particular to Pat Scanlon, which enabled that family to be so involved (with information updates) in the hunt for the missing plane.

Scannon changes.
“Something inside him was changed, but he couldn’t place what. He had come to the islands to escape the pressures of daily life, yet he found himself overcome by purpose. Somewhere nearby, young men died. They had come spirally down in a plane with one wing and probably either died on impact or drowned in the sea.

Were the remains still resting in the carcass of the plane? And where was the plane? Did the families know?”

This consumed the next twenty years of his life. “I just came around that bend in the coral,” he would say, “and I was a different person.”

Also of interest to me was learning of the American military’s Joint POW/MIA Accounting Command (JPAC) and their never ending research to recover the remains of U.S. servicemen and women missing in action. There are some very moving stories in this book.

There wasn’t any food in the book and this was clearly not a foodie memoir. Reading about the men and the simple lives they lived before being called to war and thinking about the time period they lived in, I chose a simple casserole. Chicken Divan is a type of Sunday supper or toss together meal made from chicken leftovers. It’s homey, it’s a meal of a bygone era. It would have been something the Doyle family sat down to share and talk about their day.

*Chicken Divan Casserole*
Serves 4 to 6, depending on appetites

A delicious casserole that is not only simple to make but inexpensive as well. Also a great way to get your broccoli intake (I say this in case you are among the many who do not like broccoli)! You can use low fat ingredients you can also keep it healthy. 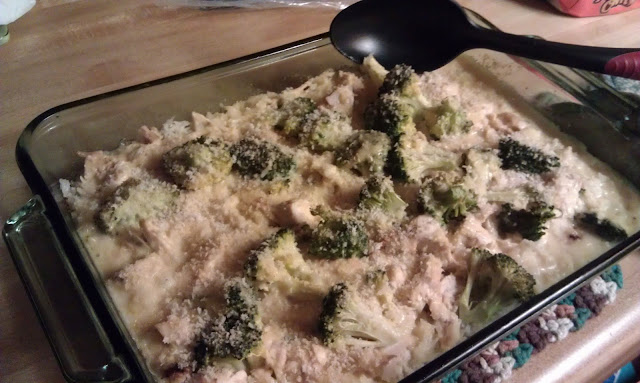 1 medium head of fresh broccoli
About a pound and a half of chicken tenders, rotisserie or whatever chicken meat you like
salt and pepper to taste
1 bay leaf
2 cups cooked or steamed basamati rice

Place the chicken into a saucepan along with cold water to cover. Add some salt and black pepper, the bay leaf and a splash of hot pepper sauce. Bring to the boil. Take off the heat, cover and set aside to cool.

Wash and trim the broccoli. Break up into bite sized florets. Peel the stems and cut into chunks. Steam until crispy tender, about 2 minutes. Remove from the heat and set aside.

Melt the butter for the sauce in a saucepan over medium heat. Whisk in the flour. Cook, stirring for one minute. Whisk in the warm milk. Cook and stir over medium heat until the mixture bubbles and thickens. Crumble in the boullion cube and whisk in along with the cheddar and Parmesan cheeses. Taste and add salt and white pepper to taste. Keep warm.

Preheat the oven to 180*C/350*F/ gas mark 4. Spray a shallow baking dish with cooking spray. Open the rice and sprinkle it over the bottom of the dish. Drain the chicken and break into pieces, sprinkle this over the rice. Top with the broccoli florets and stems. Nap the top with the warm cheese sauce, covering everything completely and allowing it to sink down into the casserole dish. Mix together the topping ingredients. Sprinkle them evenly over top of the casserole. If desired, spritz lightly with cooking spray.

Bake for 25 to 30 minutes until heated through, bubbling and the topping is golden brown. Remove from the oven and let sit for 5 minutes before serving. Delicious!

More on the author:

Short video introduction of the book