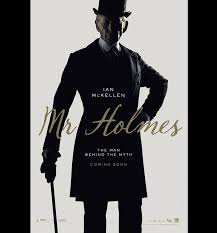 Mr. Holmes is most certainly not an action movie. The action adventure theme is our favorite but when I saw Ian McKellen was starring in Mr. Holmes I knew I wanted to watch it. The incomparable acting abilities in just about every movie we have seen him in are spot on in this movie as well.

The story unfolds with an elderly Sherlock Holmes, fraught with infirmities of age. He has severe memory loss punctuated with episodes of crystal clear thought. The slowness of movement and oft times look of bewilderment were sad at times.

From the DVD case:
“An aged, retired Sherlock Holmes, deals with early dementia, as he tries to remember his final case and a woman, the memory of whom still haunts him. He also befriends a fan, the young son of his housekeeper, who wants him to work again.”

The interactions of the boy Roger and Mr. Holmes are interesting. Roger has faith in Holmes and becomes a sounding board, both of them encouraging one another. There are many scenes of rural England which I like and can often imagine Doug and I running off and retiring to such a setting.

6 thoughts on “Mr. Holmes: Portrait of an aging classic detective”