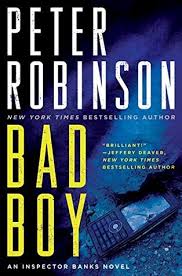 This is book number 19 in the DCI Banks series.  Only 4 more novels to go and I will be drumming my fingers awaiting the newest book.  In spite of Peter Robinson being one of my favorite writers, I haven’t breezed through his books, one after another.

DCI Banks is to be savored, in my opinion, as the character ages and grows in his life and career. When I started this series his children were young and attending school.  Now they are adults and their story lines intersect on occasion. While the majority of the story is focused on police investigation and mystery, a slice of his personal life is interjected here and there.  Obviously I am a fan.

This story opens up with an old friend and neighbor of Banks arriving at Eastvale Police Station to report the discovery of a firearm in her daughter Erin’s bedroom.  Alan Banks is on extended leave, vacationing in the American southwest so DI Annie Cabbot handles the situation.  The woman isn’t thrilled with Banks’ absence but reluctantly gives the details to DI Cabbot.

Owning or possessing a firearm in the UK isn’t a common or simple affair as it is here in the US. It’s illegal to have an unregistered firearm so the consequences are quite strict.   First off I thought, does this woman know she is turning in her daughter and that she will most likely be sent to prison?!  I can’t conceive of doing that to my child.  It’s mentioned that the lady most likely didn’t know the consequences and just wanted the gun out of her home.

Turns out DCI Banks’ daughter Tracy is a friend and roommate of Erin.  They had a bit of a falling out over Erin’s boyfriend and that is why Erin was home with her parents.  Fast forward and Tracy is with the boyfriend, letting him know Erin may be arrested.  This basically sets in motion  a dumpster fire of a situation as the boyfriend is indeed, a bad boy.  A very bad man in fact and Tracy realizes too late she is serious danger.

There is murder, police investigations, a man hunt for a psychopath and danger for my favored vegetarian DI Annie Cabbot. What a story – I couldn’t put this one down.

To reveal more would be adding spoilers so I will stop here.  Looking forward to more…only 4 books left {sob} and then I will be like an addict awaiting Mr. Robinson’s latest!