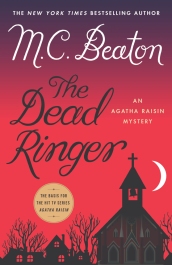 The Agatha Raisin series has been around for some time. The Dead Ringer is about the death/murder of a bell ringer and a few other characters (I don’t want to give a spoiler) in the quiet little town of Thirk Magnay England. This is book #29 in the series.

It’s been a while since I read an Agatha Raisin mystery and by getting this publication, I realized I missed a few things going on in her life. The first book in the series depicts her as a cranky, middle-aged publicist, supposedly 53 years of age. I’m guessing she doesn’t age in real time as years later, she’s still a middle-aged lady and described as attractive if not abrasive. My bookish friend Angry Grey Cat renewed my interest in the series.

Agatha has her own detective agency set up now, a change from books in the past where she was more like a Jessica Fletcher character in Murder, She Wrote. What I liked about this book was the familiarity of the little town in the Cotswolds. The picturesque setting and scenery are inviting. Thirk Magna has an ancient church called St. Ethelred and it’s the pride and joy of the community.

There are adult twin sisters who are part of the bell ringers group and very involved in the church. Apparently bell ringing is like no other type of music and isn’t written on a standard score. The six bell ringers change their order and each time they strike it’s done from memory. Quite an art of memory and dedication. It most certainly wouldn’t be for me.

The twins are swooning on about the visit of a bishop who is reputed to be very handsome and they are determined to take charge of the visit, arranging which “song” they will play on bells and generally being pains in the butt. This bishop has some scandal following him as his rich ex-fiancé has disappeared. That’s what interests Agatha very much. Now the bodies start piling up, as you would expect from one of her novels.

The mention of Detective Sargent Bill Wong was a familiar character as I remember him from all the previous books. I wondered why he hasn’t been promoted to a higher rank than D.S. in all the years (29 years!) of being on the police force. But I have to remind myself that this isn’t written in real time as DCI Alan Banks novels. Also, it has been well established that Bill is half Chinese and half British so when I read that again I thought – yeah, yeah…we all know Bill if half Chinese and Brit. That could have been left out.

Food:  There are mentions of Greek food, pub meals, gin and tonics, tea and cakes. I am on board with any of those things!

Overall, this isn’t the edgy sort of mystery I love but a milder mystery, not quite a cozy. Clear as mud? It’s fun to follow a character through a long series so if you are looking for a light mystery series, you may want to give Agatha Raisin a chance.

Much thanks to NetGalley for this advanced copy. Opinions are mine and I was not compensated for the review.    Linking up with  Joy’s Book Blog for British Isles Friday and Heather for the October Foodies Read.