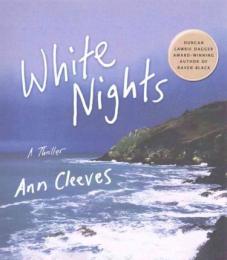 White Nights is book two in the Shetland series by Ann Cleeves. I am late getting acquainted with this series; this second book was published in 2010. The good news there is I can jump into the next story without the laboriously long wait for the author to release the latest book. Sometimes it’s nice to discover a series that’s been out a while. White Nights refers to the long period of daylight in the Shetland islands.

Our main detective character Jimmy Perez has a starring role again. Book one left it in the air whether he was staying on the island or returning to his childhood home. I haven’t seen the television series but have seen the comparisons about the books vs TV. Seems, as always, they are different. There are quite a few characters to keep up with in the book but it isn’t confusing, unless you stop reading for a bit and then go try and pick it up again. Having been ill recently, that’s what I did and had to reread the previous two chapters.

The characters are likable but I’d push Perez to be more animated. He does an awful lot of ruminating over what he should have done in regard to Fran, his love interest. As for the investigative role he’s spot on.

The book starts with a person in clown mask, handing out flyers to locals and tourists from a cruise ship.  I don’t like clowns but that didn’t put me off.   then we move to an evening at artist Bella Sinclair’s manse featuring a famous musician (Bella’s nephew) and artist Fran Hunter. They are displaying their work and hoping for sales and recognition.

It’s not a great turnout, being as clown boy sabotaged the evening by handing out flyers stating the show was canceled. Mystery number one there. During the exhibition, an Englishman staring at a portrait suddenly drops to his knees and starts crying. Perez is at the exhibition with Fran, uncomfortably mingling as a guest and not there in his professional capacity as a police officer. Now he feels the need to get the crying man and see if he needs medical attention.

What a drag for Perez, he just wants to enjoy the evening. The Englishman has no identification and claims amnesia. That’s mystery number two. While Perez is checking with other guests to see who he may have arrived with or if anyone knows him, the memory- loss Englishman disappears. Flip another chapter and he’s found hanging, an apparent suicide.

We have another death then some old bones discovered in a cave near the cliffs (mysteries three and four!) The bodies are certainly piling up in this small island setting. Sometimes the story moved too slowly, my opinion, yet I wasn’t tempted to toss the book aside. It’s the flavor of the setting, a slower lifestyle and thoughtful conversations. There are only seven books in the series so I aim to finish the Shetland series this year. Maybe I will then check out the DVDs.

This book is categorized as a mystery and thriller. More mystery, not so much a thriller. 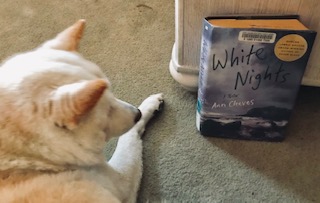