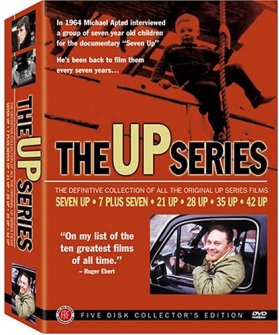 Decades back I watched a PBS show called 7 to 21 UP.  Recently I was reminded of that series and see it’s now called The UP series.  Basically the director Michael Apted brought together fourteen  British children, all aged seven, from different social and economic backgrounds.  They were all interviewed and I found it interesting to see the differences in the children, how they spoke, the levels of shyness and what their aspirations were for life.

That last line is a funny one as what seven year old child really knows what they want.  My son at that age wrote an essay (which I still have) stating he wanted to greet people in a store, become a policeman and a King.  Not necessarily in that order.  It was interesting to hear these children talk and speak about their thoughts. The first interviews were conducted in 1964.

This evolved to having the same group meet up again seven years later at age 14 and then again aged 21.  Hence the name of the original broadcast, Seven to 21 Up.  You were able to see the growth, how they matured and what they were doing with their lives.  Obviously the participation was voluntary.

I just discovered that they kept doing the series.  They are now 63 years old!  Same as me.  Here’s a clip of the show or at least the premise.

Here is a link to tell about the participants, in a nutshell.  Some were from affluent families, others working class, some ended up in posh London and others in Yorkshire and Cumbria and Scotland.  It’s a great human drama, a slice of life sort of film.