Radishes with butter and sea salt, grilled lamb sausages, smoky eggplant and flatbread. Some of those delectable images are a far cry from what my own childhood dinner table offered.

Reading this memoir by Gabrielle Hamilton, a fellow Pennsylvanian, was a treat. The first few chapters, where she talks about crossing the state lines between Jersey and PA could have been written by one of my childhood pals. For me, growing up in the tri-state area running between Pennsylvania, Delaware and Jersey (not to mention how close Maryland was for us) this portion of the memoir spoke to me…….so much, that I Googled an image of Gabrielle to be sure I didn’t grow up with her.

There are just so many chapters in this book that I enjoyed that it’s hard to tack one down as a favorite. Her unconventional upbringing by a French ex-ballet dancer mother and good ol’ Pennsylvanian craftsman were a treat to read. I will admit to wanting to know more about her brothers whom she did not write about very much. Except Todd…and even then, she didn’t share much. Her sister played a bigger role in Gabrielle’s life and evidently still does.

When her parents started the road toward divorce and mom moved out – young teenager Gabrielle and her brother Simon were abandoned at the family home/farm. Dad disappeared, wallowing in grief over his broken marriage. Simon also disappeared and Gabrielle made do …living on the canned goods and eggs and anything she found at her home to survive. Lying about her age to get a job at a restaurant (been there, done that) she had her first taste of the food industry.

Moving way on in the book, when she was in college working on her Masters degree, she landed back into the catering business to supplement her income while finishing her coursework. That is when she met Misty and realizing way later on ….. Misty was her mentor. Unbeknownst to both of them….but nonetheless true. They worked together in the catering kitchen preparing cold smoked chicken with apricot glaze and sirloin tips in molasses black-pepper sauce ….quietly moving through the prep, cooking, set ups in comfortable silences many times. But getting to know Misty in her natural environment awakened something in Gabrielle. 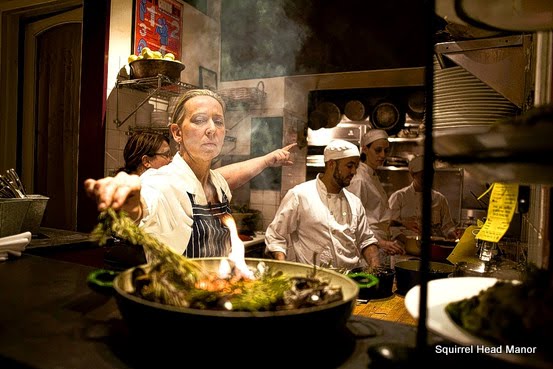 “My resolve to start a new kitchen-free life was further weakening in the direct warmth of Misty’s home style of cooking, her bumpy misshapen tomatoes ripening on her back steps, her cabbages shredded and broken down with salt and vinegar, her hunks of pork swimming in smoky, deep, earthy juices. Unwittingly, she was un-tethering me from my ten-pound knife kit, propane torches and ring molds and showing me that what I had been doing these past twenty years – and what I had come to think of as cooking – was just the impressive fourteen-ring string of a twelve-year old exhaling her first lungfuls of a Marlboro.

“Nothing more than tricks of the trade. She was waking me, in her nearly monosyllabic way, out of a dark and decades-long amnesia.”

When Gabrielle walked through the wreckage of what would become her restaurant, Prune, she had images of her childhood and hoped to share some of the important ones with future patrons. “I might serve walnuts from the Perigord and a small perfect tangerine so that the restaurant patrons could also sit at their table after the meal and squeeze the citrus peel into the candle flame to make fragrant blue and yellow sparks as I had done on my mother’s lap as a child.”

So by dusk that evening, she decided to have a second look around the property. 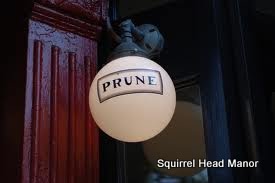 She gets energized just thinking about cooking in her restaurant:

“Every time I step in front of those burners, in that egregiously tight space, less than 12 inches between the wall I am backed up against and the burning stove top in front of me, I feel like we are two boxers—me and the heat—meeting in the center of the ring to tap gloves.”

Then there’s the story line involving her dating life with an Italian doctor, Dr. Michele Fuortes, a teacher and researcher at Weill Cornell Medical College. Fuortes was wooing the 35 year old chef-owner of Prune hoping to persuade her to marry him for US citizenship. As this courtship heats up, Gabrielle is still living with her girlfriend and still working her ass off at Prune. They had an unconventional courtship and marriage.

Some of my favorite chapters were her interactions with her mother-in-law Alda. It was clear Alda was beloved by her Italian family and Gabrielle fell in love with her too. Even without the fluency in Italian she could see, by actions, how the people coming to see Alda held her in great esteem with respect and kindness. As she studied her mother-in-law, and cooked beside her (cooking being a common language of its own) Gabrielle knew she needed to teach her young sons, Marco and Leone, about their Italian side. About kindness and respect. “Somehow, July with Alda and the Fuortes family has become the most important and anticipated month of my year.” 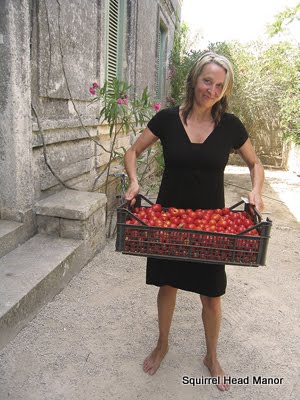 I was between a few meals which I was inspired to prepare after reading this book. But ultimately it came down to the love and shared experiences between Gabrielle and Alda. – a rich meaty eggplant dish with the appropriate accompaniments. 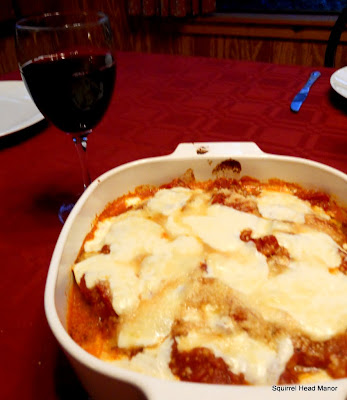 If you enjoyed Kitchen Confidential by Anthony Bourdain, I think you’ll devour this book. It was hard to put down.

19 thoughts on “Blood, Bones and Butter by Gabrielle Hamilton”