“One for sorrow, two for joy, three for a girl, four for a boy, five for silver, six for gold, seven for a secret never to be told.”

This story is told in three different voices – Megan, Rachel and Anna have their own chapters which overlap each other throughout the book. As I was reading it I thought of a line in Mr. and Mrs. Smith; Brad Pitt and Angelina Jolie are driving and confessing all the things they have made up. Brad Pitt (who gives some great expressive looks) exclaims “Web of lies!” and is clearly exasperated.

I am reading these storylines from different perspectives and that’s when I said it, aloud – web of lies! Rachel is the girl on the train. She rides this train five days a week, taking the same route and seeing the same buildings and sights. As the train makes a daily regular stop, Rachel looks toward a group of housing and watches a married couple. She starts making up things about their lives, imagining the sort of work they do, what their relationship is like. Rachel is an alcoholic, this much is clear from the beginning where she is constanting cracking open bottles of wine and premixed gin and tonics.

This quote is in one of Rachel’s chapters, her true feelings about herself. Very sad.

“I felt isolated in my misery. I became lonely so I drank a bit, and then a bit more, and then I became lonelier, because no one likes being around a drunk. I lost and I drank and I drank and I lost. I liked my job, but I didn’t have a glittering career, and even if I had, let’s be honest: women are still only valued for two things – their looks and their role as mothers. I’m not beautiful, and I can’t have kids, so what does that make me? Worthless.”

Anna and Megan live in the housing across from the train tracks. They can see the train as it stops and have no idea Rachel is staring out toward them. They have their own screwed storyline but it all comes together slowly. They all come together slowly and the end has a surprising twist. It’s difficult to reveal too much about this plot because there are too many spoilers so….that’s all I have to say. In spite of these characters not being particularly likeable, I will read more by Paula Hawkins. There is a difference between not relating ot a character and their actions and being intrigued.

There is constant mention of alcohol and tea while there is only one mention of food in this thriller. It’s not a foodie book so that doesn’t surprise me but here it is nonetheless.

“I tried to think back to earlier in the evening, to where the argument started. We were having such a good time. I’d done grilled prawns with lots of chilli and coriander, and we were drinking this delicious Chen Blanc that he’d been given by a grateful client. We were out on the patio, listening to the Killers and Kings of Lean, albums we used to play when we first got together.”

I didn’t make a shrimp with chilli but I did make a scampi with lots of butter and garlic. 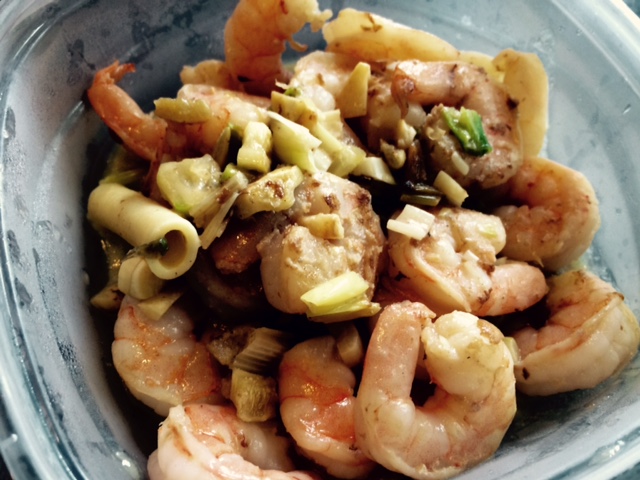 And a gin and tonic would be absolutely wonderful but alas, we are out of Hendricks gin and I settled on a vodka tonic.

19 thoughts on “The Girl on the Train – What a sad collection of characters. It had my undivided attention…”