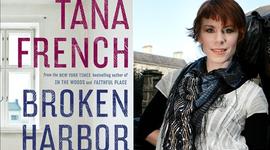 This is the fourth book in the Dublin Murder Squad series by Tana French. I would read anything she writes, she is so descriptive and engaging. I was immediately pulled into this story line from the beginning. All of her characters are so fleshed out. As I read the people come to life for me, people I would like talk to and hear about their jobs and their lives.

To be forewarned, French isn’t a cozy mystery writer. This is another murder mystery but in this one, dead children involved. If that’s offensive then you won’t want to read this one, I only bring that up as there were a few reviews where people didn’t like this book at all yet they were fans of her other novels. To me, this one is so well written and may be my favorite in the series. So far.

By the 81% mark on my Kindle I was thrown for a loop – something I did not see coming, a twist in the story. Honestly, I couldn’t put this one down.

Without giving away any spoilers I will tell you what you could read on the book jacket cover.

“Detective Mick “Scorcher” Kennedy and his partner are sent to the abandoned, half-constructed housing development Broken Harbor to investigate the brutal murder of the Spain family. The husband and two children are dead. What Scorcher thinks is an open and shut case is quickly complicated when Jenny Spain is found barely alive, and the family’s circumstances are brought to light: hidden baby monitors, a strained mortgage brought on by the housing crisis, and the increasingly erratic signs of a family in crisis.”

I am looking forward to book 5, The Secret Place, which is on sale via Amazon for $7.99 for Kindle. Just bought my copy and eagerly await another Dublin Murder Squad story.

Check out Tana French’s website and see all her books.